As the date approaches for the 5-man team event at SWSA, Gloucester, we’re delighted to announce the line-up for Team MySnookerStats. We’ve gone for a blend of youth and (life) experience. You may detect that one of the profile pics below was taken decades ago…

At the age of seven, while playing on a 5ft table in his parents’ loft, Andy once amassed an incredible 368 points in one frame against an opponent whose grasp of the rules was only matched by his appalling grasp of the cue. Since that day Andy has never looked back. He has gone on to play against a number of the world’s best players, and a fair number of its lesser players too, and his results have been absolutely consistent throughout.

He secured his qualification into the Team MySnookerStats squad by stumping up the cash to buy the team’s polo shirts. 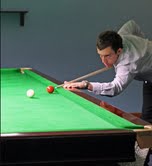 Confused about which country he really belongs to, Jack treads the well-worn path of being English but trying to qualify in Wales in the vain hope that it will be easier. He successfully completed the entry forms for each of the first two PTCs this season, but then took a playing break to focus on his studies, before coming storming back to form in the SB Classic Qualifier in Leeds. Stats will show that he thumped in a high break of sixteen, but he reckons it could easily have been even more…

Perhaps so, but inevitably, despite his smoothly-crafted cue action, his profound colourblindness often leads him astray. Just seconds after this profile pic was taken, he ploughed the red near the cushion into the white, thereby gifting the frame to his grateful opponent.

Away from the snooker table, Jack enjoys flirting on Twitter and repeatedly signing up at websites to which he has already subscribed. Should you need to contact him, please be aware that he currently has twenty-seven separate gmail accounts, and rarely checks any of them.

Richard learnt to play snooker in Liverpool by alternating between a floppy cue and an unbalanced cue (see www.gravitycue.com if you are confused), so that now when he uses an ordinary wooden cue he has a massive advantage over the rest of us. According to his Twitter, he doesn’t even need a ferrule to be devastating. He is an England International player and widely regarded as dangerous. As of this month he is also officially licensed to drive, which adds a whole new dimension to the fear he instils in people, especially on the roads in the North West…

However, it would be wrong of us to focus on this aspect, when Richard really is such a lovely lad. Indeed, despite trawling the archives extensively, we’ve yet to find a picture of him where there isn’t at least one person draping their arms around him and giving him a big cuddle. Our photoshoppers have done the best they can with this one…

Alex once missed what would normally have been considered a routine yellow against fellow team member Jack Bradford after securing 15 blacks with his 15 reds. Fortunately, with the passage of time, the endless replays of that shot which occupy his nightmares have reduced in frequency and intensity enough to allow him some semblance of a normal life.

Nevertheless, things clearly aren’t quite so straightforward for Alex, who bravely dusted himself down and entered ten of the 2010/11 season’s PTC events. While his performances on the baize in this series weren’t always heroic, his performances in a series of sexually frank video messages he sent to rivals Gareth ‘Gaz’ Allen and Allan ‘The Assassin’ Taylor (of Team Snookerbacker www.snookerbacker.com) were certainly worthy of note. His inclusion in the Team MySnookerStats squad owes a lot to the belief that these two rivals surely must have been scarred by what they witnessed, and this might just be enough to tip the balance in our favour in any psychologically tense frames…

Carl’s prowess on the snooker table sees him command great respect from his teammates. After acting as an important mentor during the formative early years of Jack Bradford’s snooker career, Carl was unfortunate to be struck by the dreaded ‘yips’ (a psychological condition which disrupts the smoothness of one’s cue action) and consequently turned his attention to poker instead, taking with him all the sympathies of his former cohorts.

However, he could never truly shake the snooker bug, and after a seemingly exhaustive attempt to experiment with every snooker cue available on Ebay, he finally seems to have found that perfect cue which enables some of the old magic to happen. We’re looking forward to seeing him drag, follow through, and stun us all.