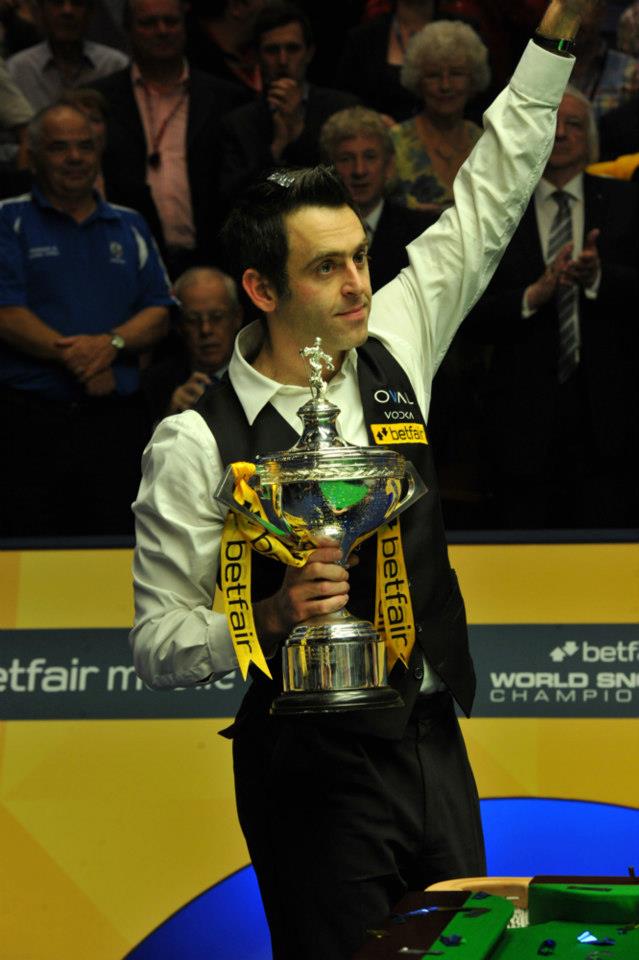 Here’s a few adjectives that should never be used in association with Ronnie O’Sullivan: natural, gifted, blessed. It might look that way to the rest of us, but the truth is he’s one of the hardest working players the game has ever known.

He may actually have been born for this game, but only in the sense that his dad started him off playing top players from a very young age and gave him access to a table, instruction and practice. He studied every aspect and nuance of the other players’ techniques and cherry-picked from these to produce a style better than any of them. In many respects, you could say snooker was put on a plate for him and he simply took advantage…

There’s no jealousy behind these observations, I assure you. Ronnie has earned every success with his astonishing dedication, no doubt aided by the positive response he chose to being separated from his dad in such awful circumstances as a youngster. When Ronnie plays snooker, it’s majestic, marvellous, a joy to behold. The white ball does his bidding, once released from the tip of his cue, as though remaining under the direct control of his mind, or a hidden remote.

As soon as he appeared on the scene, it was clear that his was a singular talent. The game of snooker advances in steps, with the previous best player guiding the way for those that follow. First we saw Steve Davis surpassed by Stephen Hendry and now, finally, here’s Ronnie. It’s just taken far longer than we thought and perhaps many of us believed that his chance may have already gone.

Without the constant internal, psychological battles he has had to face with his ongoing depression, Ronnie would surely have dominated the sport for the last ten years or more. Previously, anyone looking to put money on him to win an event has done so with the fear that Ronnie might beat himself rather than take the eventual prize. For sure, there have been several exquisitely painful meltdowns in his career. And yet it’s clear that almost every aspect of his game is stronger than everyone else’s, with the exception of his focus.

He’s achieved things that none of the others could have. An immaculate 147 in 5 minutes 27 seconds. Dennis Taylor says that will never be beaten. Well, actually Dennis, one day it certainly will (if snooker continues to be played), but it might be a long old wait before it happens.

Remember the furore when Ronnie first played shots left-handed, leaving Alain Robidoux fuming at the insult? Ha! Nowadays it’s completely accepted that all top players will have an other-hand game to fall back on, but Ronnie showed us the way and the incredible extent to which we’d underestimated this capability.

As you’ll have guessed from the introduction, I’m a keen subscriber to the theory that 10,000 hours of practice will make you an expert and Ronnie has clearly put that time in and plenty besides. The overall standard of his game really is so superior that even with a year off no one has been able to come close to him. Could he repeat the heroics with another year out? Quite possibly, based on the evidence put before us this time.

The other pre-tournament favourites all disappointed us this year. World number one Mark Selby apparently had nothing left to give at the end of a long season and was punished convincingly by the ever-improving Barry Hawkins, who also accounted for China’s finest, Ding Junhui, on his way to a hugely impressive maiden World final performance. Neil Robertson went missing even earlier – perhaps Rob “The Milkman” Milkins would be good enough to print his picture on the milk cartons?

Judd Trump could have been a contender in his 2011 form, but he looked timid and awestruck this time when faced by his illustrious stablemate. Would Shaun Murphy have fared better? It’s hard to say, but recently he doesn’t play with the same fearless edge to his game as when he announced himself so loudly to the world in 2005.

Stephen Maguire looked bemused as he made way for Dechawat Poomjaeng, as did much of the Knowledgeable Crucible Crowd. And Stuart Bingham caught the full force of Ronnie as he was blitzed in a brilliant opening session by the Rocket.

Meanwhile, Mark Allen was the only On Q Promotions player to disappoint, out-boxed as he was by Mark King. (Sam Baird still has his day to come.) Finally, John Higgins was a shadow of himself as he departed without so much as a whimper to another On Q star, Mark Davis, enjoying the best season of his career at 40.

In previous years here, Ronnie’s focus has been culpable, as twice John Higgins’s superior grit and determination have bettered him, and once Selby’s greater staying power and advantage in the safety game and table angles. It has always taken a stubborn and steadfast opponent to unsettle Ronnie. Mark Allen is possibly the only player to have ever taken him on here at his own game and won. But still, the feeling persists that had Ronnie met sports psychologist Dr Steve Peters sooner, we would most likely have seen a period of greater domination than Stephen Hendry’s. We still might. What do you reckon, Ronnie?!