Playing in Q School? Want your talents introduced to the rest of the snooker world? Get on to our Facebook page and tell us a bit about yourselves. You can play it funny or straight, or even tell us stories about your opponents or rivals in the event – all snookery banter gratefully received and we can add you below. Meanwhile, here are a few profiles we made up earlier. If this was a reality TV show, this is the point at which they’d tell you that this list is in no particular order.

(We’re very much hoping these players will come back and upload their match stats from their Q school games for a follow-up article, which should make for interesting reading. Obviously that will depend on how organized they are individually, so we’re not counting our chickens!)

MySnookerStats got a whole lot better-looking when Ben signed up for his account. But while he welcomed the idea of a feature on our site, we note that he very quickly removed hundreds of incriminating photos from his Facebook account before agreeing we could take our pick. Immaculate as he looks in this number, we saw a couple of snaps of him sporting a long blonde bob when he definitely needed his roots done. We’re not sure that his management team @PocketsSnooker were expecting to have to protect his image rights so carefully at this early stage in his nearly-professional snooker career.

Ben recently played a key role in getting Team SnookerIsland to the final of the SWSA Team Event 2012. You can follow his fortunes in far more detail on their quality blog. 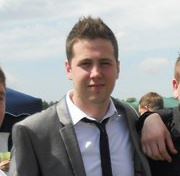 Having seen Gaz put one of my teammates to the sword at the recent SWSA event, I had to ask him the reason why he’s adopted the bespectacled look of 1985 World Champion Dennis “Don’t mention the Legends” Taylor when circling the baize. However, he was coy, claiming that it earned him admiration from the ladies.

Well, I’ve been doing some research of my own, which suggests that scientists at the @MindInSport academy may well have perfected a new laser-sighting system embedded in those weighty frames, making Gaz their very own prototype cyborg. The odd thing is he’s never been afraid to admit that he’s a machine! 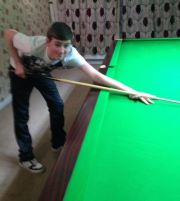 Outwardly, James Cahill would have you believe that he’s the happiest and most relaxed man in snooker. And if you get caught in his full beam smile, you could be forgiven for thinking that he’s unlikely to be ruthless on the table. But you couldn’t be further from the truth. You see, they don’t call him “Killer Cahill” for nothing. In fact, they’re scared to even call him that at all…

Digging further into his darker side, I felt like the FBI profiler who eventually caught Hannibal Lecter, as I uncovered evidence that he’d accepted a sponsorship deal from an Estate Agent’s without so much as batting an eyelid. They’re on Twitter too, by the way @tradingplacesea. 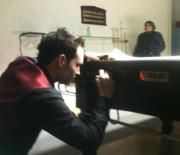 The MOD earned his place in Q school as one of two qualifiers from the Snooker Backer Classic events. I’ve actually just watched a 147 break which he compiled en route to a tournament victory in Basel back in March, in a story also broken by SB.

When I watched, I actually hadn’t read the bit about how he’d achieved all this despite getting steaming drunk with his travelling partner, Ian McCulloch, the night before. Come to think of it, by the looks of the camera work, it could easily have been filmed by McCulloch himself – be warned, I’ve still got motion sickness.

And clearly the heavy session wasn’t as tactically naive as Martin would have you believe, as he edged out an unusually green McCulloch 3-2 in the semi-final!

Anyway, for the sake of balance, I’ve got to say that even though I’ve been on the wrong end of a 4-0 pasting from Martin in an EASB event, I’d never even seen him knock in a century before this piece of film, although he did manage a couple of 70+ breaks. That said, I hope I never draw him in the 6 reds event again…