You must have tournament administrator privileges to try out these instructions. Contact us and we will set you up with a free demonstration account.


When you first visit the page, you will be logged in as an administrator for a fictitious organization called “The Demo Snooker Association”. If you have privileges to administer other organizations, you can switch organization by choosing from the drop-down list box at the top left and clicking the ‘Go’ button next to it.

Click on the “Create new tournament” tab. Now you can fill in some details for the tournament. It needs a name, a location (the drop-down list will remind you of previously used venues) and a date. When you’re done, press the “Create” button.

You are now into stage 1 out of 3 for administering the tournament, where you select the competition entrants. 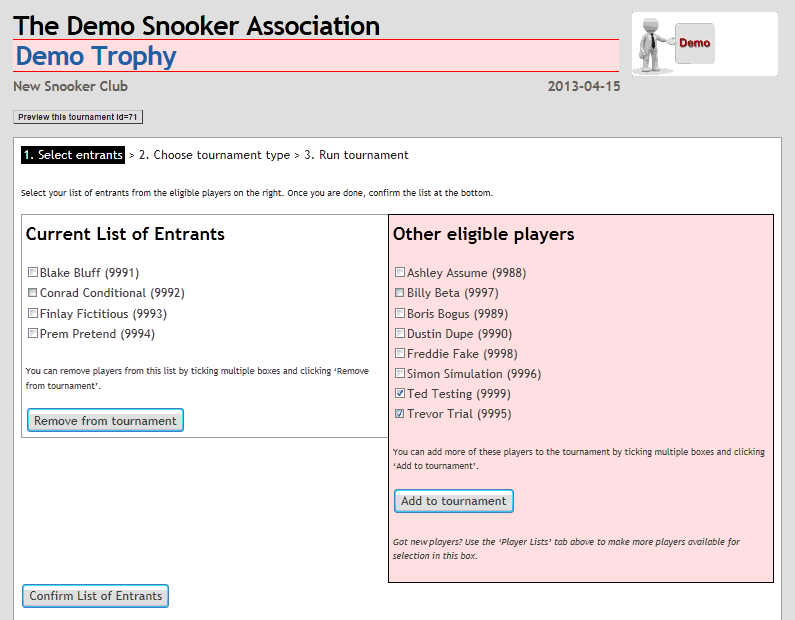 The current list of entrants appears on the left. It will be empty at this point. On the right is a list of eligible players. These are all the players who are registered as members of your organization (in this case, “The Demo Snooker Association”).

Simply tick the boxes of any players you wish to add to the tournament and press the “Add to tournament” button. If you make a mistake or change your mind, you can remove current players from the updated list on the left or add further players from the right.

Depending on how many players you have selected, you will have a different set of options available. 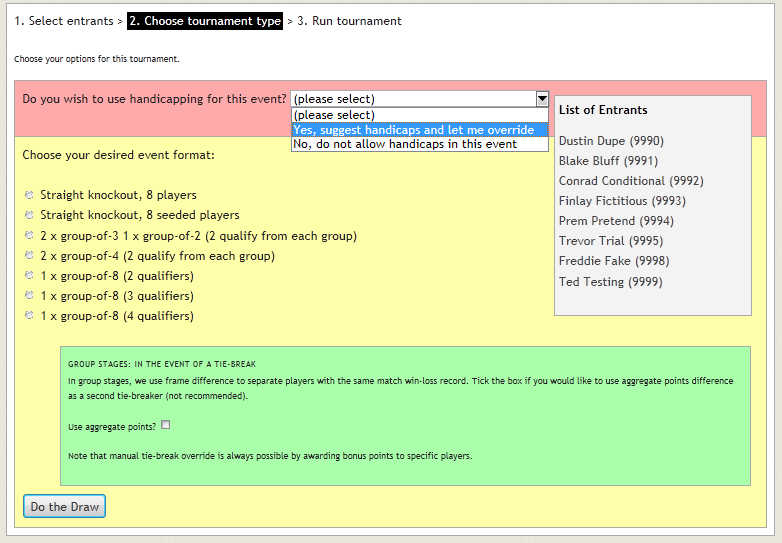 You must specify whether you wish to use handicapping for the tournament. For a ‘scratch’ tournament (i.e. no handicaps), the administration interface is simpler. For a handicap event, the MySnookerStats system will suggest a handicap based on how well it knows the ability of the players involved. If we have no match history for a player, we assume him/her to be at a 70 rating. We expect that you will know the players well (or certainly better than us initially) and we always allow you to override the suggested handicap ahead of starting each match.

You can choose your desired format, whether that be a straight knockout competition, perhaps seeding the players based on their tournament ratings, or having a round-robin group stage prior to the knockout with the players divided up into sensible group sizes. For a group stage event, you can also choose how many players qualify from each group.

When you’re ready, click “do the draw” and it’s time for the final stage 3.

Each of the tournament matches appear down the page. If you’ve chosen to have group stages first, then there will be one tab for each group, with a current league table appearing below and the knockout draw at the very bottom.

3.1 Using the app to record matches

You should instruct the players involved, the referee, or the scorer to set up a match using the MySnookerStats app between two players with the exact matching UserIDs for the game. For example, if Boris Bogus is to play Blake Bluff, then in the app you might add a new player for player 1 as:

and a new player for player 2 as:

Note that the name used for each player in the app is not important, but the UserID must be exactly right. This is because the MySnookerStats Tournament system locates uploaded matches based on the unique UserID numbers. Please ask your designated scorer for the match to follow these app match set-up instructions very closely!

When the match is uploaded from the app, you can refresh your tournament admin page and the match summary will appear as a candidate match here. When it does so, there will be an accompanying button “Choose” for you to confirm it as the final result.

The page will now refresh with the score filled in and the winning player will have been advanced to the next round. If you do make a mistake, you can simply resubmit the form with the correct details (or supply 0-0 to reset the score until later).

If anything goes wrong with scoring using the app, meaning that no candidate match appears (e.g. phone battery fail before match saved/uploaded or phone unable to make network connection), then the manual scoring form should be used to set the frame score directly. Note that as long as the manual result you enter here is the same as the result in the recorded match then the stats can be uploaded from the phone app at any later point and chosen as above.

In a knockout tournament, choosing a result or manually overriding a result will cause the winning player to advance to the next round, both on this page and on the general web display page visible to the rest of the world.

If there are players who cannot be separated either on matches won or on frames won and lost, you will need a method of doing the tie-break, whether it be a respotted black or a coin toss or some other criterion such as previous event performances. You can then assign tie-break bonus points to organize the rankings as desired. Click the “Update tie-break bonuses” button to store the new values before confirming the final group rankings.

If you have new players you wish to add for your organization, you need to click up near the top on the “Player Lists” tab. On this page, you can add a new player by entering either their MySnookerStats UserID or their MySnookerStats Username and clicking Import. You can set a preferred display name for the player rather than their username by changing the value in the list of your players underneath. More information on adding new players here.

Please note that the Import feature and the Rename feature are not active for The Demo Snooker Association, so that we can guarantee to offer a consistent demonstration to everyone.